Babies all over the world will need nappies from birth up and till about 2-3 years of age (O’Brien et al., 2009) which is roughly between 4000-6000 (average 5,5 per day) nappy changes. Disposables were only available from the 1960’s (Wiert, 2008), thus meaning that before that all babies wore cloth diapers (reusable diapers).  Disposable diapers were actually used traditionally for parents convenience when travelling (Remigios, 2014). Today disposable diaper either find their way to the disposal sites and landfills, or they litter public spaces where they are an aesthetic nuisance (Remigios, 2014). 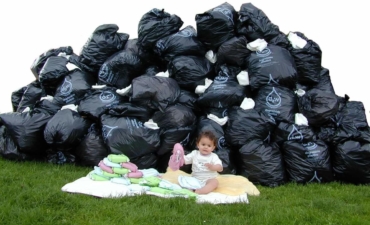 An estimated off more than 3.5 billion soiled nappies, or close to 1.1 million tonnes per year disposable nappy contribute to South Africa’s landfill (Africa, 2018), and according to the chief executive of a recycling company, Roy Brown calculated that with SA’s population of 45 million people, more than 700 000 tons of absorbent waste, such as nappies; feminine hygiene products etc, would be going to landfills every day (DARDAGAN, 2012).

Disposable nappies creates an anaerobic environment by releasing harmful methane in the landfills (SALEEM, 2017). Methane is a colourless, odourless flammable gas which is the main constituent of natural gas. This gas is a greenhouse gas just like carbon dioxide, but it is about 20 times more effective in trapping heat, meaning if there is too much methane in the atmosphere then it will trap more heat leading to more global warming (Africa, 2018) which is obviously bad.  It takes many decades for these materials to decompose (SALEEM, 2017). In fact disposable nappies can take as long as 450 years to decompose (Anon, 2014). 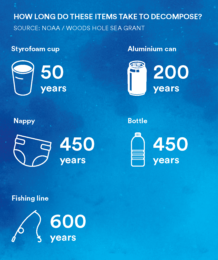 According to O’Brien et al., 2009 reusable nappies washed in cold water in a front-loading washing machine and line- produce less solid waste, uses less water and use less land area and energy (both total and non-renewable) than disposable nappies.

It takes 3 times more energy, 20 more raw materials and 2 times more water to make a disposable nappy compared to a re-useable one (Lee, 2014). Even after taking into account the materials and energy used to make them initially, the energy, water and detergent required to wash them, and their final, inevitable end point in landfill, re-useable nappies are by far the better option when it comes to environmental sustainability (Lee, 2014).

Lee, M.  2014.  Disposable Nappies: Are They Stinking Up Our Planet?  http://ozscience.com/environmental-science/disposable-nappies-are-they-stinking-up-our-planet/  Date of access: 2019/09/06.

Remigios, M.V.  2014.  The environmental health implications of the use and disposal of disposable child diapers in Senga/Nehosho suburb in Gweru City, Zimbabwe.  Global Journal of Biology, Agriculture and Health Sciences, 3(2):122-127.

SALEEM, A.  2017.  Are Disposable Diapers a Necessity? A Survey of Economically Deprived Mothers.